Traders and financial professionals work on the floor of the New York Stock Exchange (NYSE).

Bank stocks may seem far from hedge-fund darlings, but some of the best and under-the-radar managers in the industry are doubling down on them.

Every quarter, investors get a glimpse into an otherwise opaque arena as hedge funds file their long positions with the Securities and Exchange Commission, and the information is disclosed 45 days after each quarter ends. CNBC used Symmetric.io, a hedge-fund tracking firm, to find the top-performing hedge funds and see where the smart money placed their wagers in the third quarter. 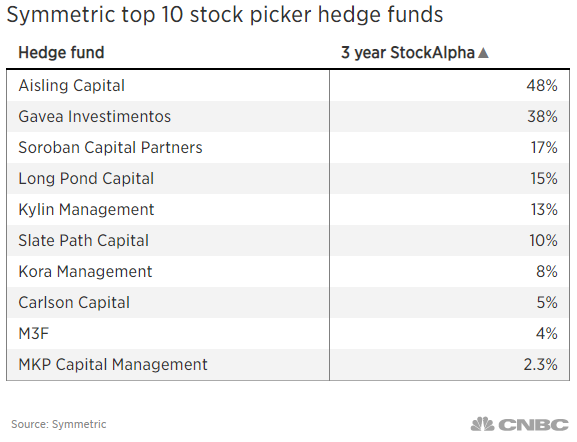 In fact, the best-performing hedge funds with a track record of beating the market are not managed by big names such as David Einhorn and Bill Ackman. The top 10 funds from Symmetric are mostly run by lesser-known managers.The data reflect third-quarter holdings that hedge funds disclosed last week in required quarterly filings.

Symmetric.io grades the stock-picking ability of nearly 1,000 hedge funds in its database with a proprietary indicator of performance called StockAlpha. It is derived by comparing the performance of equities in the fund with that of a sector exchange-traded fund.

A big chunk of of the best funds piled into financial stocks by the end of third quarter. Carlson Capital built a $69 million investment in Morgan Stanley shares and a $53 million stake in Bank of New York Mellon. Zions Bancorp, Noah Holdings, StoneCo and HarborOne Bankcorp were also loved by the best-performing hedge funds.

The bets on bank stocks have lifted the funds’ performance as the financials sector has been the biggest winner among the 11 S&P 500 groupings for the past three months, rallying more than 11% during the period. The group’s strength also led the broad market to record highs in recent weeks.

Morgan Stanley has climbed more than 22% in the past three months, while Bank of New York Mellon has returned 14%. A rebound in yields in recent months coincided with the rally in bank stocks. 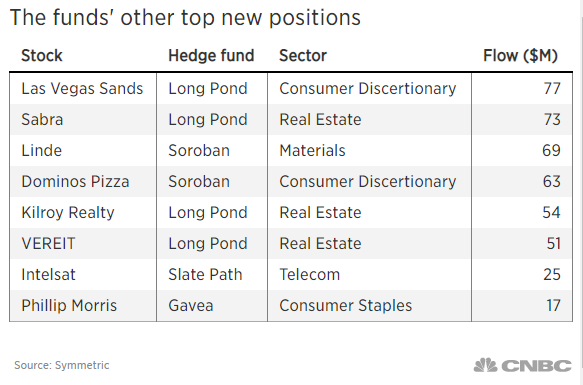 Stocks have less upside this year, according to the analysts who know them best

A pedestrian looks at an electric quotation board displaying the numbers on the Nikkei 225 Index on the Tokyo Stock...

Cramer: I feel like a ‘clown’ for defending Boeing in the early days of 737 Max scandal

CNBC’s Jim Cramer said Friday that he feels like a “clown” for defending Boeing in the early days of the...

Stock prices keep going up, but earnings are failing to keep pace

The good news is that stocks are continuing to rally because the market is assuming the magic combination of continuing...

CEO confidence in the economy has cratered, while consumers believe things are OK

Consumers and corporate chieftains are heading in the opposite direction, with one group still brimming with good thoughts about the...

Chief financial officers at big U.S. companies enter 2020 on a cautious note, with almost all anticipating an economic slowdown...

Members of the Hashed al-Shaabi paramilitary force walk above a portrait of US President Donald Trump as they hold a...