A Beverly Hills home once owned by singer-songwriter Bobby Darin and later voice actor Noel Blanc has come up for sale at $8.5 million.

The Spanish-style compound, which has a separate guesthouse and a world-class recording studio, was owned by the “Beyond the Sea” crooner during the 1960s. Blanc, known for voicing such Looney Tunes characters as Elmer Fudd and Porky Pig, sold the property in the late 1990s after nearly three decades of ownership.

The current owner — a corporate entity tied to B’z guitarist Takahiro “Tak” Matsumoto — bought the property in 2011 for about $3.64 million, records show. 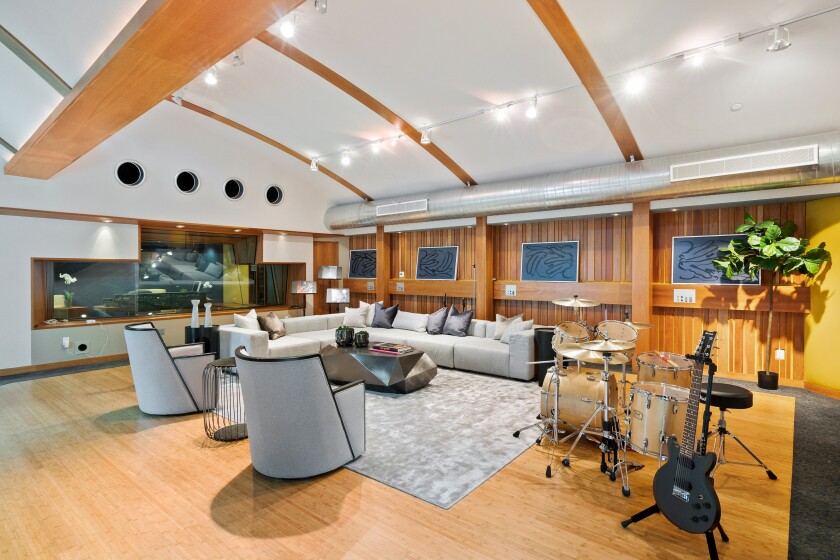 The permitted recording studio has been used by such musicians as Black Sabbath, Ozzy Osbourne and Whitesnake.

Built in the 1920s and since renovated, the two-story house has hardwood floors, recessed lighting and an updated chef’s kitchen. The living room, which has a fireplace, opens to the family room. The five bedrooms and six bathrooms include an expansive master suite with a separate office, a bar and two private terraces.

Outside, the landscaped grounds feature a dining patio and swimming pool with a spa and waterfall feature. The recording studio — used by the Red Hot Chili Peppers, Black Sabbath, Carlos Santana and Ozzy Osbourne, among others — sits in the rear.

Matsumoto, 58, formed the Japanese rock duo B’z in the late 1980s with vocalist Koshi Inaba. He won a Grammy Award for best pop instrumental album in 2010 for his collaboration with Larry Carlton on “Take Your Pick.”

People shop at the newly opened Amazon Go Store on May 07, 2019 in New York City. The cashier-less store,...

Absent any sensible reason to condemn Hudson Yards, the vast project’s innumerable detractors came up with a laughably hypothetical one...

Toward the end of NBCUniversal’s two-hour long presentation of its Peacock streaming video service Thursday, the media and entertainment company...

How hackers are making millions — legally

The term “hacker” generally brings to mind a lonesome, hooded figure, operating in the dark, stealing our money or personal...

Rapper French Montana is shooting for the stars in Hidden Hills. Four years after buying Selena Gomez’s Mediterranean mansion for...

Actress Bella Thorne has a thing for roses

Guests stepping into the dining room of Bella Thorne’s Sherman Oaks home might find it hard to believe the actress...

Home of the Week: King of the hill in Silver Lake

At nearly 4.5 acres, this estate is among the largest residences in the Silver Lake neighborhood of Los Angeles. A...

Buy these top stocks ahead of earnings, including Netflix and Guess, Wall Street analysts say

The insistent refrain “new all-time record” has been played so often recently that it sounds like a broken record. For...

As stocks hit more and more records, there are signs traders may be getting way too euphoric

About a mile from the water in Manhattan Beach, a two-home, double-lot compound once owned by U.S. soccer star Landon...

Tesla Model 3 Source: Tesla A division of the U.S. Department of Transportation is looking into driver complaints that Tesla...

On Friday, executives from four companies aired their grievances about the Big Tech giants to Congress without the protection of...

A Rancho Mirage home where film actor Jeff Chandler, known for his Oscar-nominated performance as Cochise in the 1950 film...