Major market indexes capped off another week of strong finishes, punctuated by the Dow Jones Industrial Average eclipsing 28,000 for the first time en route to a record close.

But CNBC’s Jim Cramer is already looking at what is on the horizon, including potential developments in the trade war.

“After still one more bullish week … this market needs a win in these negotiations with China,” Cramer said. “If we don’t get something positive, I think the whole edifice will start to crack.”

The “Mad Money” host on Friday explained what stories and company earnings he’ll be closely monitoring in the week ahead: 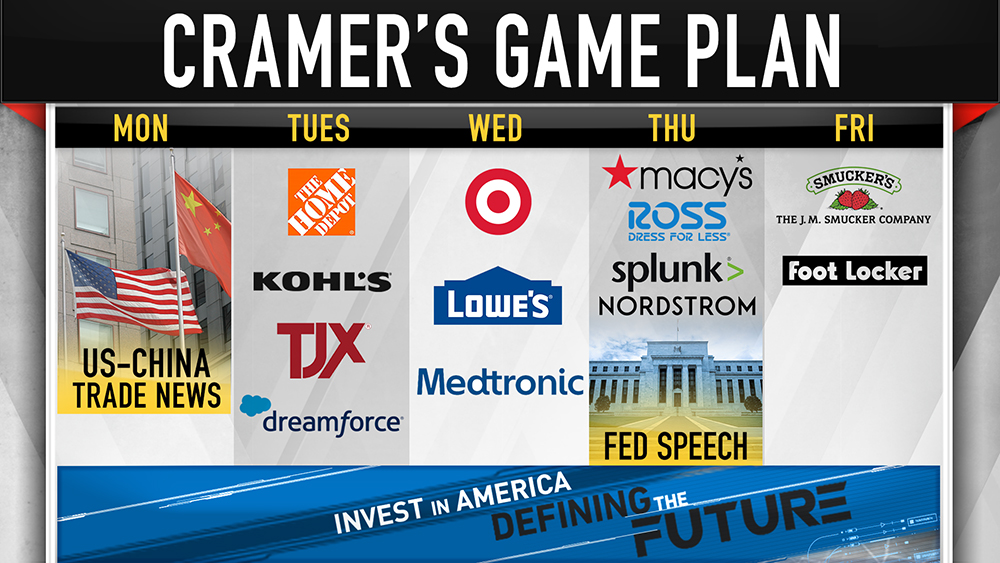 It is not out of the question that, come Monday morning, the U.S. and China have agreed to a trade deal, Cramer said.

It is in reach, Cramer said, because “all it requires” is for China to agree to pay market prices for the American pork it needs, as the country’s supply has been hurt by Asian Swine Flu.

“At this point, I honestly don’t think they’re that far apart, at least not according to the president’s chief economic advisor, Larry Kudlow,” Cramer said.

“However, if China doesn’t give in and order some bacon, it could be curtains for these trade talks,” Cramer said, noting that it would mean the tariffs set for December are likely to go into effect.

If there is no deal, expect to see investors taking profits in numerous sectors, especially health care, Cramer said.

Cramer said he expects some Democrats to argue the plan doesn’t do enough to reduce health-care costs.

“No wonder the managed care cohort absolutely caught fire,” Cramer said. Even so, Cramer said Wall Street is prone to “freak out” about risks to health-care stocks, so “I expect profit-taking Monday.”

Home Depot is expected to report before the bell. The consensus quarterly EPS estimate is $2.52. Cramer said he expects leadership to issue positive statements due to the pickup in housing.

Cramer said the home improvement company tends to sell off after earnings, so “if you don’t own it yet, though, I think you wait for the quarter.”

Kohl’s also reports before the market opens, with analysts expecting EPS to come in at $.85 for the quarter. The retailer reported an EPS of $.98 for the same quarter last year.

Cramer said its last quarter was “horrendous,” adding he is “skeptical” the company could turn it around in 90 days despite its Amazon partnership.

TJX Companies, parent company of TJ Maxx, Marshalls and HomeGoods, is another firm reporting Tuesday morning. Analysts expect a $.66 EPS. It reported $.63 for the same quarter in 2018.

“TJX is worshipped on Wall Street,” Cramer said. “Whatever they say goes.”

Target is set to report before the bell, with a quarterly EPS forecast of $1.18. For the same quarter last year, the Minneapolis-based retailer checked in at an EPS of $1.09.

Home Depot rival Lowe’s is expected to report, as well. The consensus EPS forecast for the quarter is $1.35, which is above the EPS of $1.04 it ended up reporting for the same quarter in 2018.

Cramer said Lowe’s is a work in progress, but one that is worth investing in due to CEO Marvin Ellison’s leadership.

Medtronic, a medical devices company, also is expected to report.

The company “may not jibe with the stronger economy I’ve been talking about, but the company is a standout performer and the device stocks are red hot,” Cramer said.

Macy’s is expected to report before the market opens, with a consensus EPS forecast of $.01 for the quarter. Last year, it reported $.27 for the same quarter.

“So many are betting against this chain because it has developed a habit, a nasty habit by the way, of missing the numbers,” Cramer said. That negativity may mean it is a decent trade going into its earnings report, he said.

“But if you buy Macy’s for a trade, do not overstay your welcome, though,” he said.

Ross Stores should report after the close Thursday, and Cramer said the discount retailer usually reports a decent number.

Then its stock falls, he said, “and you have to buy it because 10 days it’s dramatically higher. It’s just how it trades.”

Splunk will join Ross Stores by issuing its report after the close. Its stock was hurt this week after a research firm said the software company was overvalued. For the quarter, the consensus EPS forecast is $-0.18.

Cramer said he thinks the company is “fantastic” but understands that the software space has gotten crowded. Still, he said he is siding with the bulls.

Nordstrom also reports after the bell. Analysts are projecting a quarterly EPS of $.66.

Cramer also noted that Loretta Mester, who is president of the Federal Reserve Bank of Cleveland, is expected to speak. He said her economic outlook has been less optimistic recently and he wouldn’t be surprised if she talked about the need to raise interest rates.

J.M. Smucker is expected to report before the bell, and Cramer said the company is important to watch because food stocks have been trading all over the place as of late.

“I think this stock can bottom at a certain lower,” he said.

Foot Locker also reports, with projected quarterly earnings at $1.07 per share. Cramer said its earnings report could offer insight into how the American consumer is handling tariffs from the trade war.

Lawyers say they want the New Orleans Saints and its spokesman to testify about that football team’s public relations assistance...

Porsche will return to Super Bowl advertising for the first time since 1997 with a 60-second commercial that features the...

CNBC’s Jim Cramer broke down the looming week of earnings reports with quarterly results coming from the likes of Facebook,...

As fears of the coronavirus grow, stock prices are likely to contract and investors should be prepared for buying opportunities,...

Cramer’s lightning round: American Express is working with millennials

American Express: “Oh, that quarter was beautiful. … and they did it with millennials. Millennials are really signing up, 50%...

CNBC’s Jim Cramer said Friday that he is perplexed by the bullish reviews L Brands, the holding company of Victoria’s...

Trump just revealed the logo for the Space Force, and it looks like the ‘Star Trek’ symbol

Even 17 years after the first Call of Duty game release, the franchise is still one of the biggest sales...

Wendy’s does not need to beat McDonald’s for its breakfast to succeed, analyst says

Wendy’s foray back into breakfast can be a success without swiping considerable market share from McDonald’s, Barclays’ analyst Jeffrey Bernstein...

Trump thanks China’s Xi Jinping for handling of coronavirus

An electrician sets up wiring while workers drive excavators at the construction site of a field hospital on January 24,...

Boeing 737 Max could be recertified before midyear, FAA says

Two workers walk under the wing of a 737 Max aircraft at the Boeing factory in Renton, Washington, March 27,...

New Orleans Saints owner Gayle Benson stands on the field during a NFL game at the Mercedes Benz Superdome on...

A militia member checks the body temperature of a driver on a vehicle at an expressway toll gate in Wuhan...

The National Lacrosse League has reached a new six-figure sponsorship deal with entertainment and telecom giant AT&T as it tries...

Boeing 737 Max could be recertified before mid-year, FAA says

Two workers walk under the wing of a 737 Max aircraft at the Boeing factory in Renton, Washington, March 27,...